A new series of articles diving into the science behind treating skin lesions with Cryotherapy. This week we cover warts/verrucae.

The virus involved is the human papillomavirus- HPV, there are roughly 14 different variants of the virus, most warts and verrucae being caused by HPV V and VII.

When you treat them, the aim is to destroy the cells that contain the virus and hence the viral particles too. Sometimes however if there are viable virus particles remaining, they can reinfect corneum cells and it then appears as if the wart/verrucae has returned, this can cause stimulation in new cells (the virus basically turns the dead St Corneum cells back on to start reproducing, hence the ‘tumour’ definition) and it looks like it is bigger than before.

When people use acids for treatment as in proprietary treatments, it is usually salicylic acid which hydrates cells and causes tissue breakdown, but does not destroy the virus, and therefore needs constantly repeated treatments to destroy the tissue, it is a very ineffective and inefficient method. Likewise covering with Duct tape just macerates the skin and has the same effect as the acids. Both methods can release viable virus causing reinfection.

In dermatology we recommend that you do not treat more than 3 times with cryotherapy as there will be no further improvement with more treatments, however, there is often a reaction a few months afterwards, as by releasing the virus you can get an immune response.

Remember as part of the initial inflammation you get a release of white blood cells – macrophages and T helper cells. The helper cells produce antibodies to the virus and macrophages engulf and destroy them so often the wart/verrucae will clear away a few months later.

Free Marketing for your Salon!

We all need a boost at the moment. So, we have put... read more Coolifting continues to evolve to offer the most comprehensive solutions in... read more

A new series of posts diving into the science behind treating... read more

This facial takes less than half an hour. First, my skin... read more Daily Record Lipocontrast review – ‘Want to lose inches without exercise? Everything you need to know about the latest ‘fat freezing’ beauty treatment’

Combining the power of heat and cold, Lipocontrast is a new... read more 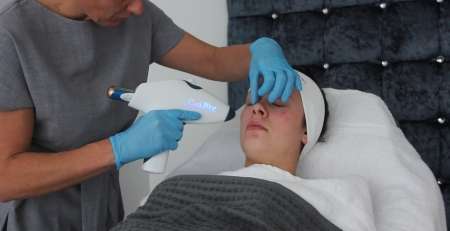 Why are these procedures catching consumers’ eyes? What benefits do they... read more

Prof Once again we will be at Professional Beauty London on... read more

Lipocontrast in the Salon Magazine

The Lipocontrast Duo - the evolution of fat freezing - was... read more